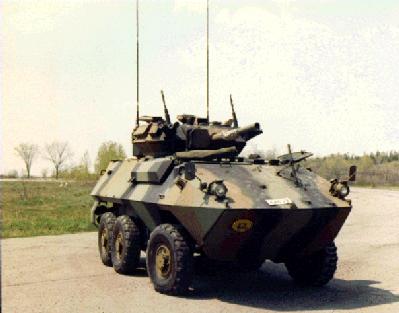 The Cougar is part of the 6x6 Armoured Vehicle, General Purpose (AVGP) family of vehicles built by General Motors in London, Ontario. The hull is from the Swiss MOWAG Piranha and the turret is from the British Alvis Scorpion. Canada purchased 195 Cougars in 1979.

The vehicle is officially designated a tank trainer, although it is also refered to as a direct fire support vehicle. It has a 76mm gun and a 7.62mm C-6 MG co-axial in a turret with manual traverse. It has a crew of 3 (crew commander, gunner, driver) and is fully amphibious.

The Armoured Combat Vehicle project is currently studying the purchase of a replacement for the Cougar, planned for around the turn of the century. A vehicle suitable both for close combat as well as operations other than war (peacekeeping) is required, which implies that it will be both wheeled and light (under 30 tons). All the vehicles currently under consideration have a 105mm gun.